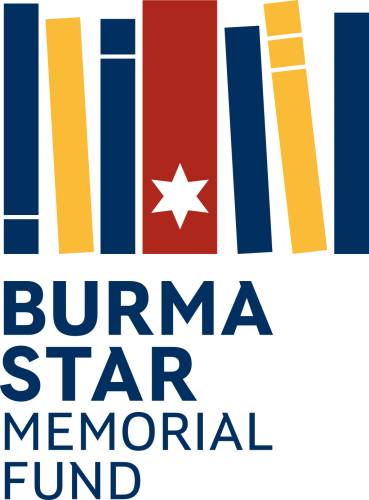 With the Japanese in control of Burma, the Burma road cut the Japanese were in a position to attack and possibly conquer India. The only Supplies the Allies could get to China were by flying the 'hump' route. An air-ferry service which cleared the Himalayas at an altitude of 23,000 feet.

The Allies put great importance on keeping the Chinese in the war and therefore tying down a third of the Japanese army. It was therefore vital to reopen the Burma road somehow.

The Americans put enormous resources into the Burma campaign. By the end of 1942, the British were once more thinking of offensive operations.

A new and strange British commander had been appointed, this was Brigadier Order Wingate, an officer who had already acquired a reputation in Abyssinia. He had managed to sell Churchill the idea of long-range penetration and between February and May 1943 waged a private war beyond Chindwin where his men cut the railway from Mandalay to Myitkina in seventy-five places during March.

The Survivors of the Chindits returned after suffering immense hardships, and abandoning considerable numbers of sick and wounded to the Japanese, who for their part reacted very little to these pinprick attacks. The press made much of these attacks in an attempt to bolster morale after the retreat of 1942. Wingate was responsible for dispensing with the annoying myth that the Japanese were invincible in the jungle. He was also responsible for demonstrating the new technique of air supply. It also offset the failure of attempts in early 1943 to recapture Akyab and its important airfield, by means of an advance down the Arakan coast.

In August 1943, South East Asia Command (SEAC) was formed. The Supreme commander was Lord Louis Mountbatten, who already had an intimate knowledge of inter-service co-operation, and was an inspiring leader. He knew that the men of the Fourteenth Army, including British, Indian, Gurkha and African, had to be made to believe they could beat the Japanese. They had to learn to move, fight and live in the jungle.

Malaria, Dysentery, Mite Typhus and Skin Troubles were the chief diseases that caused the army no end of headaches. 120 men were evacuated sick for every one wounded. At the end of 1942, One division had 5,000 sick out of a total strength of 17,000. In some units hardly enough men were left to look after the mules and drive the vehicles.

The Strictest health precautions were imposed. Research into tropical diseases' Introduction of Mepacrine and other drugs and the treatment of the sick in forward areas instead of evacuating them to India meant an absence from duty of weeks instead of months. The arrival of forward surgical teams; Evacuation by light aircraft from airstrips cut out of the jungle or rice field, the innovation of jeep ambulances; and the gallant work of the devoted medical staff and volunteers-all served to diminish the ravages of disease and to increase the chances of recovery for the wounded.

Mountbatten's immediate aim was straightforward. It was to re-establish communications with China. The methods to achieve this were highly complex, there was to be an offensive in northern Burma in the winter of 1943-4. The Ledo Road from Assam, which was under construction was to be extended so as to join the old Burma Road at Mongyu near Lashio. A pipeline was to be built from Calcutta to Assam, and another parallel to the Ledo road. Supplies flown over the 'hump' were to be doubled to 20,000 tons a month. Advanced bases were to be set up in China, from which Allied aircraft could bomb Japan and Manchukuo.

The main objective was Myitkina with its three airfields. Once they were in Allied hands in would be possible to shorten the journey to China and cut out the rigorous climb over the Hump.

Stilwell's Chinese-American Army (Two Chinese Divisions trained in India and 'Merrill's Marauders') was to thrust down the Chindwin to Myitkina. The Chindits were flown into Burma to cut the communications of the Japanese facing Stilwell and to disrupt an expected offensive into Manipur. In the Arakan XV Corps under Lieutenant-General Alexander Frank Philip Christison was to retake Akyab.

The British offensive in the Arakan was violently counter-attacked. the Japanese in their usual fashion went round the flanks and got behind their opponents. There was confusion and affright, hospitals and headquarters were overrun. However, the British stuck tight instead of pulling out, formed Brigade and Divisional Boxes and hung on. This was possible was totally due to the Allied command of the air. The British at last had a secure line of communications and supply.

On 15 March 1944, the Japanese took the offensive. They meant to get into the Brahmaputra valley and overrun the airfields which were supplying China. Had they succeeded they might well have taken East India.

The Battle lasted three months. By the beginning of June the two armies were strangely interlocked; in the north, the two British Divisions around Kohima and between them and Imphal two Japanese divisions; Around Imphal and Palel four more British divisions; and south of them a Japanese division and brigade.

Outnumbered two to one the Japanese eventually cracked and recrossed the Chindwin in disorder. They lost most of their tanks and lorries, estimates are they also lost 250 guns and 53,000 men. The Fourteenth Army suffered though, 167,000 casualties, but not a single gun was lost.

A 13 day siege was waged by the Japanese at Kohima. Colonel H. U. Richards held out with a scratch garrison some 2,500 strong, whose main units were the 4th Queen's Own Royal West Kent Regiment and the 1st Assam Regiment. A series of attacks gradually reduced the perimeter. Their main water supply was lost and by the end, men were crawling out to get water from a spring only 30 yards from a Japanese position. No-man's land was the width of a Tennis court. The resistance was relieved by the 5th Division which was flown in. The defenders made their last stand on Garrison Hill and survived until the 5th arrived.

Meanwhile, the Chindits whose leader had been killed in a plane crash, waged their second campaign. Their chief accomplishment was to delay two infantry and one artillery battalions of the Japanese army for a couple of months which were on their way to take part in the Vital battle for Imphal.

Stilwell advanced slowly and it was not until 4 August that he took Myitkina.

In December, The British crossed the Chindwin and the Japanese retired to the Irrawaddy. Slim brought up his left hand corps to his right flank and effected a crossing of the Irrawaddy south of Mandalay confusing the Japanese. The 14th Army improvised a flotilla to cross the river.

By the end of February 1945, the 14th Army had reached the vital communications centre of Meiktila.

Meanwhile, the Arakan XV Corps suddenly came to life again and in a fast moving amphibious campaign retook Akyab on the 3rd January, and inflicted a sharp reverse on the Japanese at Myebon.

General Kimura's reserves were exhausted after the fighting in Meiktila, Mandalay and the great battle for central Burma. Too late he decided to withdraw and the 14th Army beat him in the race for Toungoo, largely because of a well-organized and positioned force of Karen Guerrillas delaying the Japanese with ambush after ambush.

Could the British reach Rangoon before the monsoon could break? On the 3rd May the British won that race too. With the Japanese Army scattered and in pieces all over Burma, they were defeated. All that remained was to mop up.

The 'Forgotten Army' should not be forgotten for its work in the most adversarial of conditions, it was always on the end of the list for supplies, and still triumphed over a remarkable enemy in miserable conditions.