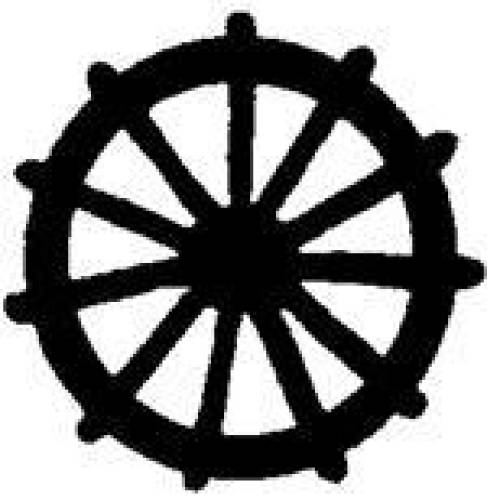 The Badge of this unit was an eleven spoked wheel on a yellow/gold background.  The badge of the Division was retained whilst the Division was in captivity. The entrance to Changi Jail POW camp was decorated with the Badge to which was added in ""Dog Latin"" the motto: ""Qui Utime Melior Ridet"", which roughly translated means ""He who Laughs Last Laughs Best"" this for a considerable time was excepted by the Japanese with all solemnity as the Divisional Motto without realising the purport, and the fact that it had been added for their discomfort.

This Division less one Brigade was formed in Malaya in May 1941 coming under the command of the 111th Indian Army Corps.

The Division was at the out set of a gruelling ten-week campaign located in the North of the Malay Peninsular on the Thailand Border and was the first formation in action in North Kedah against the Japanese when they launched their attack on 8th Dec 1941.

Suffering severe losses in men & equipment at Jitra & Gurun, & later at Slim River, the Division saw more hard fighting than any other formation in Malaya.

Following a violent Battle on the Muar River in Jahore the Division was finally compelled to withdraw to Singapore Island, where, what remained of the 9th & 11th Divisions amalgamated.

Once again the Division found it's self in the front line & despite their exhausting two month ordeal on the Mainland, the 8th Brigade of this Division counter attacked & recaptured  vital ground between the Naval Base & the causeway with heavy casualties.

At the time of the surrender the front line  of this Division was still intact & the men still had faith in their Fighting Commander.

In Malaya, under heavy rain, Japanese troops reach the Jitra Line, which the British have been buiding for six months. Barely 500 Japanese troops attack the 11th Indian division amid the downpour, crumpling all but the Leicesters and the 22nd Gurkhas.  The 11th Indian Divison flees in panic. 15th Brigade loses a fourth of its men, 28th Brigade more than 700 men. More than 3,000 British and Indian troops surrender. The Japanese capture 50 field guns, 50 heavy machine guns, 300 trucks and armored cars, and three months provisions, ammunition, and fuel, to the great relief of Japanese supply officers. The Japanese lose barely 27 killed and 83 wounded. Historians describe the battle of Jitra as ""a major disaster, a disgrace to British arms.""

The cause of this debacle is the poor training of the British and Indian troops for jungle warfare, poor equipment (British guns can only fire 12 rounds a day) and weak British leadership. Lt. Gen. Sir Lewis Heath, leading the 3rd Corps has a ""withdrawal complex."" Australian Maj. Gen. Gordon Bennett is only concerned with providing snappy quotes for reporters and his own escape. Lt. Gen. Arthur Percival, the army commander, is an unimaginative staff officer who refuses to build entrenchments on Singapore Island because it would be ""bad for morale."" Sir Shenton Thomas, the senior civilian, refuses to break civilian rules of long lunch breaks and weekends off. And the overall commander, Air Chief Marshal Sir Robert Brooke-Popham, is ""near nervous collapse.""