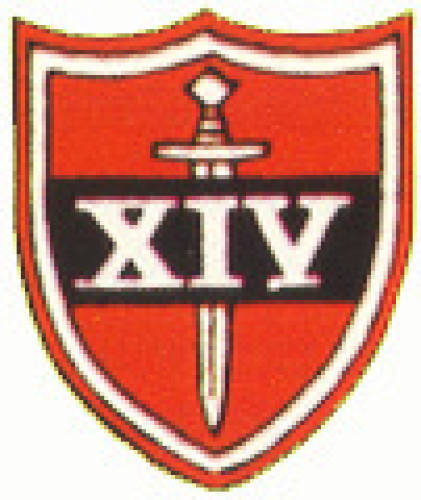 The badge of this army was a red shield with a narrow white inner border, the centre divided by a black horizontal band on which the roman numerals ""XIV"" were inscribed in white, set across a white sword hilt upper most.

This was the Badge of the Hard Fighting ""Fourteenth Army"".  This army was formed in November 1943, it was said to be the largest single Army formed during the 2nd World War, (later to be known as the ""Forgotten Army"").

At the time it was estimated that there were a million men under it's command, it also held the longest battle line of any army during the war, this stretched from the Bay of Bengal to the borders of China, it also fought in some of the most arduous country in the world from Manipur to Rangoon.

The Fourteenth Army’s greatest victories were in the Arakan, at Imphal, Kohima, Kennedy Peak, Mandalay and Meiktilla. This led to the  defeat of the Japanese Imperial Army and the liberation of Burma.

The Fourteenth Army was withdrawn to India in June 1945, to prepare for the invasion of Malaya.  The HQ followed 34th Corps to Malaya in September 1945.

The Army was divided into three Corps and these were:

The 34th Corps was raised for the Invasion of Malaya

The Fourteenth Army never in fact commanded more than three corps for when the 34th Corps was raised the 4th and 15th Corps had passed on to The Twelfth Army command.

The following divisions served in the Fourteenth Army:

with the following Indian Divisions: