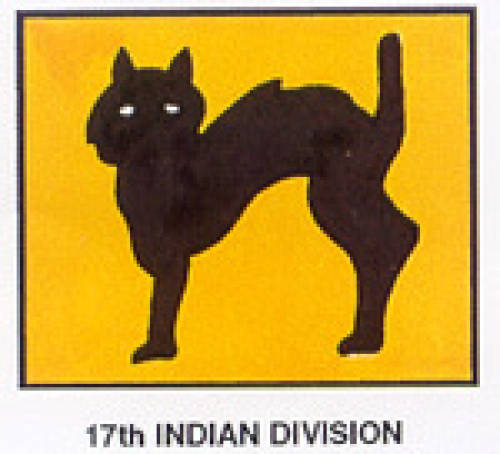 17 Mountain Division was originally raised as 17 Indian Division at Ahmednagar on 01 July 1941 under the command of Maj Gen HW Lewis, CE, CIE, DSO. Though the formation was earmarked for operation in North Africa after raising, it was rushed to Burma as part of the Burma Corps due to the adverse situation prevailing in SE Asia. In March 1942, Maj Gen DT ‘Punch’ Cowan, CD, CEE, DSO, MC assumed command of the formation. The division as part of 4 Corps and under 14 Army, was launched into Burma in December 1944. Starting with the battle of Meiktila, it continued its advance into Burma till Rangoon fell to the Allied Forces in June 1945. The formation won many laurels including 7 VCs, and 161 MCs, besides other gallantry awards.

On conclusion of World War II, the Division was disembodied in 1946. It was re-raised as 17 Infantry Division at Ambala in 15 November 1960 under Maj Gen KS Katoch, MC. During 1961, the Division was assigned the task of liberating Goa under Maj Gen Candeth Subsequently on 15 Nov 1963, the Formation moved to Sikkim since then it has been successfully guarding the 245 Km long Sikkim border with Tibet.

Structure Of The Division: (Order of Battle 1942)

Commanded by Brig. Ekin up to the Sittang Bridge catastrophe of 1942 after which the 46th ceased to exist

Commanded by Brig. RT Cameron for most of the 1st campaign and well into 1942.  It is believed that he was then relieved by Brig. N Hugh-Jones

The Following Regiments also served with this Division during the withdrawal from Burma.

An Infantry Btn of Chinese Army