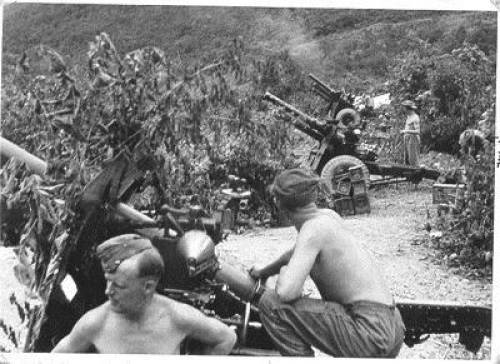 This was the first Regiment of the Royal Artillery to receive the 'true' 25 pounder gun and when it changed to the 14th Regiment, it was the last Regiment to give the gun up.

In July 1945 as part of 19 Division, the 28th Field took part in the battle to prevent the Japanese in the Pegu Yomas, from escaping across the Sittang.  This was the last allied success of the war.

The following is an extract from 'A History of the 14th Regiment, Royal Artillery' (regrettably no longer in print) by Major WG Clarke R.A. and with his permission

The first taste of action in the Far East for the Regiment came during the first week of December 1943, when they engaged a supply boat in Mangdow  Harbour.  From this period on there was plenty of action as the batteries engaged Japanese patrols and working parties.  On the 14th December the regiment was visited by Lord Louis Mountbatten, the C-in-C South East Asia.  He met all Officers and Warrant Officers, medal holders and the oldest and youngest soldiers.  Christmas Eve was spent practising regimental concentrations which was interrupted by a call for fire by one of the regimental OPs.  Once this was dealt with the regimental practice continued.  On Christmas Day the CO visited all Battery locations and distributed ducks for dinner!  No action was reported by either side.

1944 began with a mass of activity as the regiment and other units of the Division began attacks upon the Japanese positions.  During the first weeks of January, torrential rain hampered operations.  However, there were many attacks by the companies of 2/1 Punjab Regiment and the Dogras, supported by fire from the guns of the Regiment.  Some casualties were sustained by both sides.  By the end of the month the daily rate of ammunition expenditure by the batteries of the regiment had increased dramatically, as various targets, including Japanese mortar positions and artillery positions, were engaged.  This routine continued throughout the month as the British attempted to prise the Japanese forces out of the various defensive bunkers and strategic points they were occupying.

On the 16th March the regiment finally left Bawzi Bazaar and moved first by road to Dohayri and then by air to Imphal where batteries were deployed with the various infantry 'boxes' (1st Bty for example joined the Suffolk Box).  During the months of April, May and June the batteries of the regiment were in almost constant action in support of infantry attacks by the Suffolk Regiment, 2/1 Punjabs and 1/13 Dogras.  On the 26th June they came out of action and spent some time carrying out maintenance and training with the new 25 pdr guns (replacing the old 3.7 Hows).

During July the regiment received two visitors.  The first was (once more) Lord Louis Mountbatten who was visiting, on 2nd, the whole of the 5th Indian Div.  The second on the 11th of the month was the 14th Army Commander, Lt. Gen. 'Bill' Slim.  The regiment moved out of the host area of Kanglatongi on the 4th August and began operations once again against the enemy on the 5th.  Operations continued from area of Tiddim Road throughout the month.  By September there was not much activity against the enemy, so much time given over to maintenance and training.  The jungle battles against the Japanese began again in earnest on 30th September with Battery missions onto targets in the village of Lai Lai.  This part of the campaign continued with frequent attacks against the enemy and many moves by the guns to fresh positions in order to keep in range.  Few casualties were sustained at this time, though one of the OP Gunners, Gunner Heath, was reported to have been killed during an air resupply drop on the 28th September - a tragic accident.

5th Indian Division was finally relieved between 22nd and 26th November 1944.  This part of the campaign over, 28th (J) Field Regiment moved during the period 27th to 30th to the area of Maram, where they remained to carry out training, maintenance and repair.  The Regiment remained in this state of training, repair and relaxation until March, during which time they were rearmed with the Mk II 25 pdr and received many very welcome replacements for worn out arms and equipment.  There was also time for sport and entertainment.  Inter Battery football matches were organised and several ENSA shows, including one starring George Formby, were available for the troops.  There were also three cinemas available in the area and the whole entertainment available during the period was enjoyed by all ranks.  On 20th March the regiment moved out from this rather tranquil location (though much training had of course been carried out) and back into action.  After a tortuous road journey the regiment arrived in the area of Meiktila on 2nd April.  By 2045 hours that evening the first rounds had been fired on enemy locations.  This part of the campaign was in effect the ""Race for Rangoon"" with the British virtually chasing the Japs out of Burma.

Once again the regiment was in support of largely Indian infantry, in particular the 1/17 Dogras and 6/15 Punjabi.  The regiment remained in and around the area of Meiktila, gradually moving south through the country, involved constantly in operations against the enemy.  Some casualties were sustained by all Batteries.  By the end of the month the regiment had moved in a series of leap-frog movements over 100 miles - through the Arakan, south of their original position.  The war diaries of the time record that as the British Army gradually moved south the attitude of the locals became increasingly friendly, perhaps as a result of their real dislike of the Japanese.  During this part of the campaign, apart from the Punjabi and Dogra regiments there were also in the division the 2nd W Yorks, Jats, 1st Burma Rifles, 7th Cavalry, 24 Mtn Regiment RA and 4th Field Regt RA.  The movement and the action continued throughout the next few months as British forces continued their efforts to push the Japanese army out of Burma.  Casualties in the regiment increased at this time, the OPs in particular suffered several men killed and wounded.  Rangoon was entered by men of 26th Ind Div on the 2nd May.  As the guns of the Allied Forces fell silent in Europe on the 8th May 1945, 28th Field Regiment along with 3/2 Punjabis and 2nd W Yorks were involved throughout the day in any attack upon the usually stubborn Japanese positions.  by the end of May the regiment were deployed in the area of Hlegu and Nyaungtashe, having spent an interesting month of active operations in very open country of small villages and paddy fields.  The advance continued.

On the 8th June elements of the regiment withdrew from operations and spent a period of two weeks carrying out general maintenance of vehicles and equipment and attending church services.  Gun batteries moved from their locations in the Toungoo area on the 28th of the month, and were in action in support of various infantry operations by 4/4 GR by 1945 hrs that evening.  July continued in much the same vein, though by now batteries were able to send men to Toungoo rest camp and ENSA concerts.  Various infantry regiments changed during this period.  Jats and Punjabis being replaced by 4/6 Gurkha Rifles and the Royal Berkshire Regiment.

As a result of the American atomic bombing of Nagasaki and Hiroshima, Japanese forces in Burma finally surrendered to allied troops on 15th August (the surrender actually being signed at Rangoon on 13th September 1945).  On 24th August the regiment moved to Pynmana.

Thus ended five years of war for the 28th Field Regiment.  They had served with distinction on two continents and fought all three of the Axis powers.  The Italians in East Africa, the Germans in the Western Desert and finally the Japanese in Burma.  As the Autumn settled over Rangoon, thoughts of home, peace and a new world entered the thoughts of the Officers and men of the regiment, many of whom had fought with the 28th Field from the early days of 1941 and the battle of Keren. ©W G Clarke 1995

Spasmodic fighting still continued into 1946 with some of the Japanese troops either being unaware of the surrender or not abiding by it, and the 1st, 3rd, 5th/57th Field Batteries were involved in Burma, Assam, Shan States, The Irrawaddy, Rangoon Road, and Pyinmana before moving to Nasik Road Camp, the RA depots at Malir, Deolali and Karachi in India.