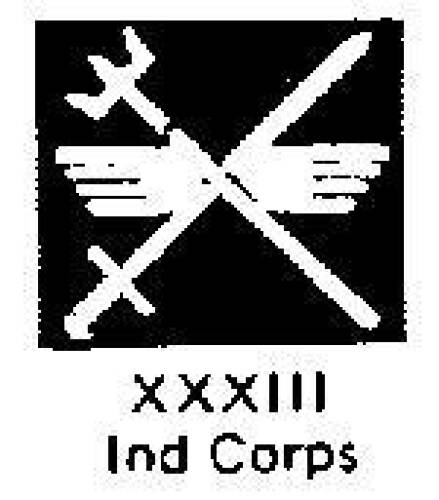 The first Badge of the 33rd indian corps was a black silhouette of  the head of the Duke of Wellington on a green background within a red circle.  The badge was chosen by the then Corps Commander Lieut/Gen Alexander Frank Philip Christison (CSI CB DSO MC) because the Operational Area allocated to the formation covered most of the territory over which the Duke of Wellington fought whilst in India (1800-1805).

The Corps was raised in November  1942 to Command the 19th and 25th Indian Divisions, the 251st Indian Tank Brigade and other units and formations allocated to the Defence of Southern India.

As they were intended as an Amphibious Expeditionary Force, the new badge was made up of the ""trident"" for the Royal Navy, the ""sword"" for the Army and the ""wings"" for the Royal Air Force,  (a similar motif as Combined Operations).

The Corps had the Task of halting the Northern most Japanese drive at Kohima, following the reopening of the land route to Imphal, by continuous action through the 1944-1945 monsoons the Japanese 15th Army were driven back across the Chindwin, from where the drive to the Irrawaddy was launched culminating in the Capture of Mandalay on the 19th March 1945.

Operating South of the line of the Irrawaddy the Corps cleared the Oilfields Area around Yenaugyaung to link with the Troops pushing North from Rangoon on the 15th May 1945.

The Corps was reassigned to the Twelfth Army on the 2nd May 1945.