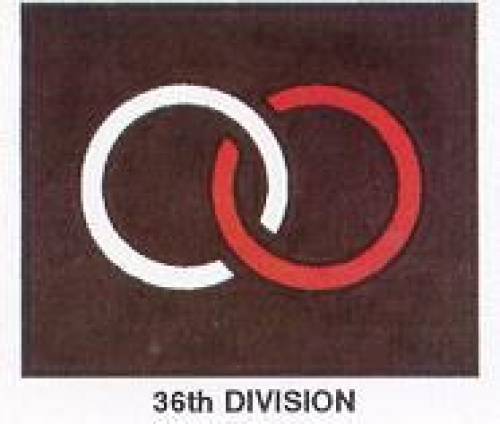 The original badge of this unit was the geometric design of a ""trident"", for the Navy, ""sword"" for the Army, and ""wings"" for the Air Force, this badge was chosen because they were part of an amphibious unit.  it was consequently used as the badge of the 33rd Indian Corps.

The Division was formed in 1943 as the Army component of the Combined Training Centre in India, in 1943 the 29th and 72nd British Brigades were allocated to this formation, although all the other units were Indian, at this time they were under command of the Indian Expeditionary Forces, and called the 251st Tank Brigade.  The Division took part in the Arakan Operations in 1944, in support of the 5th Indian Division in the Jungle covered hill country around the Ngayadauk Pass and the Mayu Tunnels Area.

In May 1944 they were withdrawn from the Arakan Front.  After a short rest at Shillong they were then moved up to the Ledo Road area the Terminus of the Burma Road, where the came under the command of General J. Stillwell's American- Chinese Forces (they had by this time had the Indian Units withdrawn) they were now ""The 36th British Division"", and saw much of the hard fighting around Myitkyina and Mogaung, where they took over from the remains of the Chindits.

After the capture of Myitkyina Airfield in December 1944, the 26th Indian Infantry Brigade ( ex 6th Indian Division Middle East) was flown in to join the Division.

In January 1945 the Division crossed the Irrawaddy and came under the command of the Fourteenth Army and saw much of the Hard Fighting that led to the final operation that broke the last Japanese resistance in Burma,

The Division was returned to India in June 1945 and was disbanded.

They were Commanded by Maj/Gen FW Festing (CB CBE DSO).