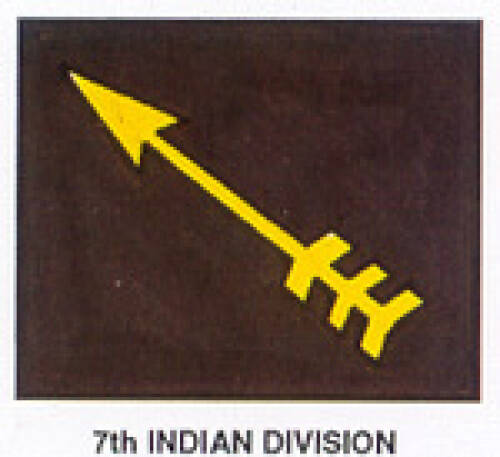 The badge of this unit was a yellow arrow on a black background and they were known as ""The Golden Arrow” Division. The badge was chosen to indicate the direction of line of  advance in the protection of the north west frontier of India, for which the division was raised to protect, but all its fighting took place in the north east.

This formation was in the thick of the hard fighting in the Arakan, and was cut-off in the Ngakyedauk Pass where it formed the famous ""Admin Box"" at Sinzweye and held off all the Japanese attacks and so stopped their advance into India.

This formation later joined the ""Fourteenth Army"" in its advance into Burma, crossing the Irrawaddy on the 14th Feb 1945 it established a bridgehead at Nyanugu which enabled the 17th Indian Infantry Division to make a dash for Meiktilla, the capture of which, in conjunction with the 255th Indian Armoured Brigade, was one of the causes of the Japanese resistance in north Burma crumbling. The division also took part in the fierce fighting which drove the Japanese from Myingyan and Venangyaung.

In Sept 1945 the division was flown to Siam where it concentrated and disarmed over 115,000 Japanese Troops. In April 1946 the division arrived in Malaya where it remained until the end of the year when it returned to India.

They were commanded by Maj/Gen F Messervy (DSO).

The following is a report in the S.E.A.C. Souvenir newspaper of Autumn 1945 about the contribution made by the 7th Indian Infantry Division.

At the beginning of December 1944, 7th Indian Division was resting and re-organising at Kohima after a years hard fighting in the Arakan, at Kohima and at Ukhrul. The Division received orders to concentrate in the Kabaw Valley with the object of crossing the Chindwin behind 19th Indian Division and advancing into the plains North of Mandalay.

The 200 miles move to Tanu start­ed during the first week of December and at that moment the Divisional Commander. Major-General Frank Messerby took over the command of 4 Corps. He was succeeded by Major-General Evans, already well known to the Division from the days of the ‘Admin Box’ in the Arakan.

On arrival in the Kawaw Valley, the role of the Division was changed and at the end of December it was ordered to concentrate south of the Kalemyo as rapidly as possible.  It’s new tasks were to advance down the Gangaw Valley, to outflank the Japanese forces in Central Burma and to establish a bridgehead over the Irrawaddy near Pakokku by 15 Feb, to enable 17th Indian Division and the remainder of 4th Corps to make their thrust to Meiktila.

Pakokku was 350 miles from Tamu.  This distance was therefore to be covered in less than six weeks. Over half the Division was still in Kohima and the Japanese were still holding out in the Gangaw Valley South of Kalemyo.

By the end of the first week in January, the advance had started. Roads were little more than cart tracks, rivers were unfordable and elephants were used to build the bridges necessary for M. T. and tanks. Thick teak forests and broken country afforded plenty of scope for demolitions and delaying action and the Japanese made full use of them.

Nevertheless, with their ‘tail’ one hundred or more miles behind the leading troops of the 7th Indian Division reached the Irrawaddy and were assaulting Pakokku the 4th February.  The distance of 350 miles had been covered in 4 weeks against Japanese rear-guards and demolitions and on a scale of transport designed only for a short advance in thick jungle.

During the first ten days of February, the Divisional ‘tail’ was closed up, bridging material. was brought forward, recces were carried out and plans made for crossing one of the largest rivers in the world - over a mile wide at the point of crossing.

The 7th Indian Division crossed the Irrawaddy on 14 Feb one day ahead of schedule near the historic town of Pagan, and within three days the way was open for the remainder of 4 Corps.

Subsequent operations of the Division were not spectacular, but called nevertheless for maximum effort from the troops. One brigade moved northwards to clear determined pockets of resistance at Myingyan. Another brigade moved South to re­pel repeated counter-attacks by the enemy from the direction of Yenan­gyaung. These operations caused heavy casualties to the Japanese and were only achieved after arduous marches and grim fighting.

After the mopping-up came the advance down the Irrawaddy. While one brigade pushed hard down the West bank to Seikpyu, another brilliant brigade action resulted in the capture of Kyaukpadaung. It took the enemy completely by surprise and enabled the same troops to capture the oilfields of Chauk and YeriangyauNg.

The Irrawaddy was then crossed once more. This time it was from East to West, to cut of the hard-pressed enemy withdrawing down the West bank and to complete the destruction of his forces withdrawing from the Arakan over the An Pass.

The first phase of the  7th 1ndian Division’s operations had been a prob­lem of movement over great distances and under considerable difficulties.

Without the fullest co-operation between all arms and services and in particular, magnificent work by the Engineers, the operation would not have been possible. The second phase was one of ensuring that  the smallest possible number of Japs escaped from Burma. During this phase just under 2,000 Jap bodies were counted and 40 prisoners taken. 43 guns of various types, 38 medium machine guns. and three tanks were captured.

British, Indian and Gurkha troops of the 7th Indian Division and the African troops under command have the satisfaction of knowing that they opened the way for the decisive operation at Meiktila and so contributed largely to the complete defeat of the Japanese Armies in Burma.