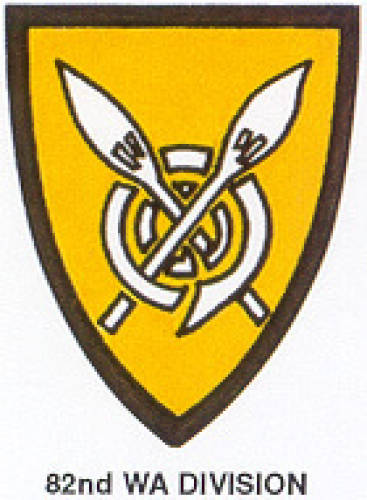 The badge of this unit was two spears on a native carriers headband set on a yellow shield.

They were dispatched to India in July 1944, serving as part of the ""Fourteenth Army"", they joined up with the 81st West African Division in the assault on Myowaung and the victorious advance through Burma that led to the liberation of Mandalay and Rangoon, and consequently Burma.

They were commanded by Maj/Gen HG Stockwell (DSO)

The 82nd (W.A.) Division (the two original Nigerian and Gold Coast brigades, which had fought in the East African Campaign, Abyssinia, plus the newly formed Nigerian 4th Brigade, a Gold Coast battery, two Nigerian batteries and the Auxiliary (Carrier) Groups), arrived in India in January 1944. It had been preceded by the 81st (W.A.) Division consisting of the 3rd Nigerian Brigade which, in fact, was to serve outstandingly with the Chindits, the 5th Gold Coast Brigade and the 6th Brigade com­prising one battalion each from Nigeria , Sierra Leone and the Gambia .

After a pause for re-equipping and further training, 82 Div. moved into the Arakan in November as part of XV Corps, for the offensive to clear the Japanese from central Burma and recapture Ran­goon . From the Kalapanzin Valley its task was to move down the Mayu Peninsula , then link up with 81 Div. which, in the first move of the offensive, had been pushing across the mountainous terrain of the Kaladan Valley . Although most of the men came from the open grass country of the northern regions of West Africa , they were still quick to adapt to jungle warfare conditions. Both divisions fought hard and persuasively over the hilly, forested and sodden terrain, pushing their foe ever south­wards, with the object of eliminating them from the Myochaung area. Towards the end of January 1945 fierce opposition had been overcome when elements of both divisions were heavily engaged, par­ticularly the 1st Nigerian Brigade. On the 24th January Myochaung fell to 81 Div. then supported by two brigades of the 82nd Div. Operations were to continue relentlessly southwards.

For 82nd Div., dependent on air supply, there followed the pursuit of the enemy through the mountainous and difficult country. Retreating parties of Japanese retaliated strenuously. As hill features and ridges were fought over, the enemy proved as reluctant as ever to give ground. After confused fighting 2nd Brigade (Gold Coast) worked towards Kangaw when it came under the com­mand of 25 (Indian) Division. Heavy fighting followed but resistance was soon overcome. At the same time, in their parallel advance further to the east, 1st and 4th (Nigerian) Brigades were engaged in bitter fighting, suffering considerable casualties in overcoming the opposition before the way was opened to Kaw and later Kyweguseik(22nd Feb.) The heavily congested operation, when 4th Brigade lost two of its commanding officers, continued into March by when, after linking up with Indian units, both the area of the Dalet Chaung and the enemy supply base of Tamandu, were reached.

The next objective for 82nd Div. was the Japanese northern group, known to be occupying a strongly fortified position near AN, in a straight line from Tamandu, some 17 miles to the south east.

The ‘road to AN’, no more than river crossings, the search for routes across the interminable hills, moving along razor-backed ridges, with tracks to be cut and graded, was as anticipated heavily contested. With the reduction in air supply, reliance fell wholly on the carrier battalions who were soon required to head-load all supplies. The Japanese were receiving reinforcements. The 2nd Brigade (Gold Coast) firmly based at Letrnauk came under pressure, suffering many casualties including the British Commander and Brigade Major amongst the wounded. Though the Gold Coast battalions repulsed all attacks and kept up offensive patrols, the position became untenable. Under cover of 1st (Nigerian) Brigade, the main body withdrew on the 13th April. Long distance patrols kept up the pressure on the enemy now occupying Letmauk and AN, culminating in the Japanese withdrawal on the 13th May when elements of 1st Brigade re-occupied AN.

In the coastal belt of Southern Arakan the enemy had to be cleared particularly from the Taun­gup Pass on the road to Prome. In April. 82 Div. with the East African 22nd Brigade under command, had been moving south from Tamandu when it encountered slight, if spirited, opposition. By the end of May enemy resistance had been overcome and the Division had settled in monsoon quarters, with Divisional HQs and 1st Brigade in the Kindaungyyi area, 2nd Brigade at Taungup and 4th Brigade at Sandoway. Both West African Divisions had excelled at their tasks. Their casualties had been the heaviest of XV Corps. The total killed, wounded and missing in the Corps (including Corps Troops and 22 (E.A.) Brigade) was 5,093, out of which the equivalent casualty figures for the West African and Indian Divisions were: 81st (W.A.) Div — 438: 25 (Indian) Div. — 1,374: 82nd (W.A.) Div. — 2,085:

Together with its vital ancillary units the 82nd Division had joined action on the 14th December 1944 . On the conclusion of operations in May 1945, its brigades had covered despite the appalling terrain and conditions: 1st Brigade ( Nigeria ) 285 miles; 2nd Brigade (Gold Coast) 274 miles; 4th Brigade ( Nigeria ) 428 miles, the Recce Regt 282 miles. Throughout these operations the ‘carrier’ Auxiliary Groups had played a vital and prominent role.

All West African units had departed from Asia for good during 1946. Of their comrades who were left behind, inevitably some rested in unmarked graves by jungle tracks. Some (the sick and battle casualties) rested in isolated graves or cemeteries in Burma and India, with others at the larger cemeteries of Burma such as Dalet Chaung near Tamandu, the Taukyan War Cemetery, or are remembered at the War Memorial in Rangoon.