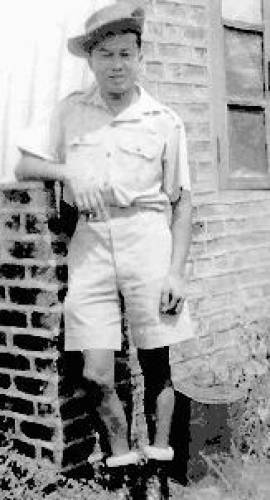 Bill's parents emigrated to Canada from Canton, China, and settled in Cumberland on Vancouver Island. His father worked in the coal mines. Later the family opened a general store in Cumberland, called Chow Trading Company.

Bill has 3 brothers and 1 sister, all still living. Bill left school in grade 10 and went to work in Victoria as a truck driver for a wholesale fruit company at 18. He was conscripted into the Canadian army with many other Chinese Canadians at the request of the British Government in 1944 to the British Army and sent to England. (Read Bill's article on Force 136 by clicking here)

There, he was attached to the British army, in special forces for Asia. He was posted to Poona, India, and was trained as a Morse code operator to work in the jungle, but remained in Meerut, India until the end of the war in the Pacific. He came back to Canada in 1946 and was discharged from the armed forces as a private.

Bill was in Shaughnessy hospital for 10 months with a lung complaint and during that time he became friends with Bill Urquhart, who was in the same hospital. On discharge from the hospital, Bill was offered a Veterans Affairs course in watch repair. He borrowed $1,000 from his mother and opened a store on April 1st, 1950 on West 41st Avenue in Vancouver. He moved three times on the same street over a period of years and finally settled his business at 2241 West 41st Avenue. Bill owns the building where the store is located, but he has actively retired from the store, and one of his daughters now runs the business.

He married Lily in 1958, and they eventually had 4 children - two boys and two girls. One son met a tragic death in 1999. The other son is a forestry engineer in Creston BC. Bill has three grandchildren from this son.

Bill joined the Royal Canadian Legion, Branch 44, in 1976, and was Sergeant-at-Arms for 11 years. He also served on the Executive and chaired the Sick and Visiting Committee, Widows Fund, and Cadet Corps #5381 Committee.

Force 136 was a British Intelligence organization in World War II composed of military personnel working behind enemy lines. Its objectives were to gather important information on enemy movement and to organize local underground resistance groups to disrupt enemy communication and supply lines. The role and duties of this unit were similar to other Secret Service agencies, such as the famous M.I..9 Unit (British Military Intelligence, Group 9) which operated in enemy occupied Europe, and the S.O.E. Unit (Special Operation Executive) that operated also in Europe but in Asia as well.

The 1950 movie, ""Bridge Over The River Kwai,"" gave a good description of what the agents of Force 136 did. The movie showed not only how the mission was carried out in blowing up the ""bridge"" but depicted the type of training these men received and the difficult task they had in hiking through thick jungle, back-packing heavy loads of plastic explosives, radio transmitters and food supplies, to reach their target without being detected.

The role of Force136 was slightly different prom M.I.9. In Europe, secret agents not only carried out information gathering on enemy movement and organized underground resistance groups to disrupt enemy supply lines, they also rescued downed Allied airmen and sneaked them back to England via submarines. In South East Asia, there was very little Allied bombing activity, and subsequently there was no need for major rescue operations.

Men in Force 136 had their espionage training in various parts of India and Ceylon. They learned how to handle and set-up plastic explosives and how to use detonators and ""time pencils"" for setting off charges at specific times. They trained how to scout and how best to approach an enemy camp or ammunition dump to sabotage installations without being detected. To keep in contact with headquarters, wireless operating and Morse code training, including coding messages in a Chinese wording code system, were also part of the course.

On completion of this tactical training, which included hand to hand combat and use of light weapons, these men received parachute training on the ground and in the air. This latter phase was required in order to drop them behind enemy lines. However, if the drop-offs were near the shores, landings from submarines were employed.

Members of force 136 normally operated in groups of 8. with each agent a specialist in his party. Besides the No. I and No.2 commanders, there were 2 demolition experts, a wireless operator, a coder/decoder and two scouts. Each man had his own assignment and, it was most important that everyone operated as a team, because the success of the operation depended solely on it. It was also important not to get caught by the enemy as it would mean certain death in front of the firing squad, because secret service agents were treated as spies.

At war’s end in South East Asia, the role and duties of force 136 were changed. The groups were instructed to control the immediate disengagement of the Japanese army in their respective areas, prevent the guerrilla groups from taking revenge on the surrendering Japanese troops, and care for the released Allied prisoners of war until the arrival of Allied forces. Although the men of Force 136 were small in number, their contribution played a big role in the outcome of the war in South East Asia and they were given high recognition by the British and Canadian governments at the end of the war.