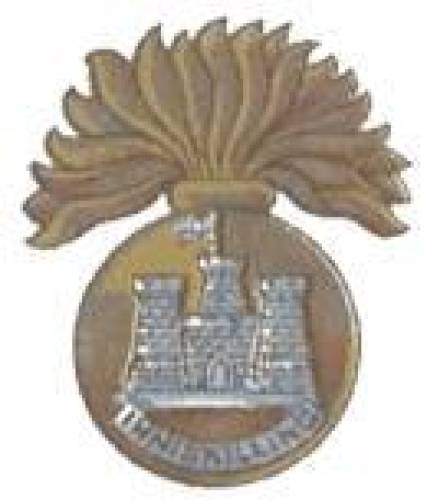 From the Summer 1984 edition of Dekho!

The Irish infantry regiments were represented in the Burma Campaign only by 1st Bn Royal Inniskilling Fusiliers, but it is certain that there were very many more Irishmen present, serving with other regiments.

“Tiffin’s Inniskilling Regiment” was founded in 1689 the year after King James II, England’s last Roman Catholic monarch, was overthrown and replaced on the throne by Dutch William and his wife Mary, Protestant daughter of the deposed

James. William III, as Prince of Orange, was already at war with France, and since Louis XIV gave succour and assistance to the exiled James Stuart there began that long series of major wars, with France always the prime enemy, which were to end on the field of Waterloo 126 years later. The fighting, which at the outset was somewhat localised in Ireland and the Netherlands, eventually became almost world-wide, and the Inniskilling Regiment took an increasingly active and distinguished part, particularly in the West Indies where their first battle honours were won, and where yellow fever killed more soldiers than did enemy shot.

At Waterloo, where so many regiments performed prodigies of valour and endurance, none exceeded and few equalled the deeds of the Inniskillings. Ordered to hold an important crossroads, they were decimated by heavy cannon fire which carved bloody gaps in their squares, but the survivors stood firm, repelling determined cavalry charges. At the end of a terrible day, most of the com­panies were commanded by sergeants, and few could muster as many as 20 unwounded men. Close by the crossroads 450 of the 700 Inniskillings who had marched into battle lay dead in their squares where they had fallen. The Duke of Wellington was always sparing with his praise, but he said of the Inniskillings, “They saved the centre of my line at Waterloo.”

The practice of designating regiments by their Colonels names had been discontinued in 1751, and a numerical system was introduced in its place. “Tiffin’s” became the 27th or Inniskilling Regiment of Foot. It is interesting to note that the Royal Warrant which authorised this change granted certain privileges to the ‘Six Old Corps’ and to the ‘Royal Regiments.’ The 27th were one of the ‘Six Old Corps,’ from which it can be inferred that they had already gained an enviable reputation.

The 27th bore that number until 1881, when they were united with the 108th Regiment, originally an Irish regiment in the service of the Honourable East India Company, to become the 1st and 2nd Battalions of the Royal Inniskilling Fusiliers.

The exploits of the Irish regiments in the 1914-18 War will never be forgotten. Three Irish divisions were formed. The 10th, which included the 5th and 6th Inniskillings, was the first-ever all Irish division, serving with great distinction at Gallopoli (where the 1st Battalion also fought splendidly with the gallant 29th Division), and later in Macedonia. The 16th (Irish) Division, which included the 7th and 8th Inniskillings, and the 36th (Ulster) Division, including the 9th, 10th and 11th Inniskillings, served in France and Flanders, fighting with great gallantry, and suffering terrible casualties, in many campaigns from the Somme in 1916 until the end of the war.

The foundation of the Irish Free State (as Eire was then called) in 1922 led inevitably to the disbandment of the five splendid regiments which had recruited in the Southern provinces. The Royal Irish Fusiliers, although based in Ulster, had also recruited throughout the country, and were listed for disbandment. They were saved by a truly magnificent gesture by the Inniskillings, who offered to forfeit their 2nd Battalion if the Royal Irish Fusiliers could remain at single battalion strength. This generous and neighbourly act was quite without precedent. The two regiments acted in most respects as one until 1937, when virtue was rewarded and both were authorised to raise 2nd Battalions again.

The 1st Inniskillings were then serving in Singapore, but shortly moved to the popular Hill Station of Wellington in Southern India, where they were located at the outbreak of World War H. When Japan entered the war, the Inniskillings formed part of the weak and ill-equipped force committed to defend Burma. Heavily involved in the dreadful retreat of 1942, they eventually reached Assam after months of fighting and marching, an exhausted remnant of a once fine battalion. It says much for their spirit that within months they had absorbed drafts of replacements, re-trained

and re-equipped, and were ready and willing to play a leading part in the Arakan with 14th Indian Div. Months of hard fighting, in which the Inniskillings demonstrated their traditional offensive spirit, ended when a Japanese counter-attack left them completely isolated and with no recourse but to split up into small groups and to fight their way north through the jungle. For the second time, a much depleted battalion re-assembled in India. They took no further part in active operations in Burma, remaining in India on internal security duties until 1947, when they were one of the last British units to depart.

The 2nd Battalion went to France in 1939 with 5 Div., and later accompanied that much-travelled formation to Madagascar, India, Syria and Egypt, in quick succession. They fought with distinction in Sicily and in Italy, where, at Isernia, they reached the town, an American objective, ahead of our allies. The Americans were puzzled, upon entering Isernia, to find representations of the Castle of Inniskilling stencilled on many prominent walls.

The 6th Battalion was part of 38th (Irish) Brigade and landed at Algiers with 1st Army in 1942. Transferring to 8th Army, the Brigade was involved in severe fighting in Sicily and Italy where, following heavy losses in both battalions, the 2nd and 6th were amalgamated to form a new 2nd Battalion which replaced the 6th in the Irish Brigade. They fought through the last winter of the war, and had reached the River Po when the Germans capitulated.

All the line infantry regiments lost their 2nd Battalions soon after the war; the first step in the swingeing reduction of infantry which has been imposed. However, the Inniskillings were one of eight regiments which were required to raise 2nd Battalions again during the 1950’s, when world­wide commitments were unexpectedly heavy. Since 1947, they had been ‘brigaded’ with the Royal Ulster Rifles and the Royal Irish Fusiliers, each regiment retaining its separate identity, but moving officers and men freely within the ‘North Irish Brigade’ according to need. This arrangement was concluded in 1968, when the Brigade was abolished and the regiments amalgamated to form the Royal Irish Rangers. So the Inniskillings paraded for the last time to bring to a sad end 279 years of honourable and distinguished service: 62 as Tiffin’s Regiment, 130 as the 27th, and 87 as Fusiliers, but always “Inniskillings.”