The Story of the Burma Campaign

It was one of the most magnificent – and arduous – feats of arms in military history. A million men, from more than 20 nations, fighting a powerful and implacable foe through thousands of miles of intractable, malaria-ridden jungle, doggedly ploughing on, despite suffering a series of shattering early reverses.

With more than 100 languages and numerous faiths, customs and eating habits, the 14th Army was marshalled together by one man, General Sir William Slim. General Slim was a brilliant leader, loved by his men for his humanity and admired by them for his shrewd military skill. A combination of his leadership and the breathtaking bravery of those under his command ultimately led to a victory that freed millions from tyranny.

This is the story of the Burma Campaign in the Second World War, the story of the 14th Army, the largest Commonwealth army ever assembled. By rights it should be one of the most celebrated stories of that cataclysmic global conflict. Yet the 14th Army is known as the ‘Forgotten Army’. The long, hard, heroic slog of the Burma Campaign was overlooked at the time and is still very much in the shadow of the better-known campaigns fought in Europe, Africa and elsewhere.

The work of remembering the enormous sacrifices of the 'Forgotten Army' and carrying on its noble work of making a better world for all of us now falls to the Memorial Fund.

Future generations will need the courage and resourcefulness these men and women showed. Our scholarships will link tomorrow's solutions to yesterday's heroes.

Read detailed accounts of the key battles of the Burma Campaign

Read stories from the Allied Formations

Enjoy the original stories written by members of the Allied Forces who fought in Burma.

View the military maps used during the Campaign.

View examples of Japanese propaganda dropped into Burma between 1942 and 1945.

"The regrouping of forces in South East Asia for the reoccupation of so many areas has compelled me regretfully to order the break-up of the Fourteenth Army.

When you were formed I told you that you could become one of the best known armies that the British Empire ever had. And so you did.

Inheriting a legacy of defeat and disaster, constantly short of equipment and men, by your discipline, courage, dash, skill and above all, by your refusal ever to be beaten by Man or Nature, you achieved a success few thought possible.

Many races fighting and working in comradeship learned to appreciate one another's values. Carry that mutual respect into the future, wherever you may be called. Carry with you, too, qualities that made the Fourteenth Army what it was. Whether you serve on, or return to civil life, they will be required, and the world will be a better place because you retained them.

Remember you were of the Fourteenth Army, and never say die. So long as you live you may be proud of our Army and of the part you played in it, against odds at a critical time in history.

As your C-in-C, I send each one of you my thanks, my admiration and my confidence that, in peace as in war, the men and women of the Fourteenth Army will play a noble part. Good luck to you and God bless you." 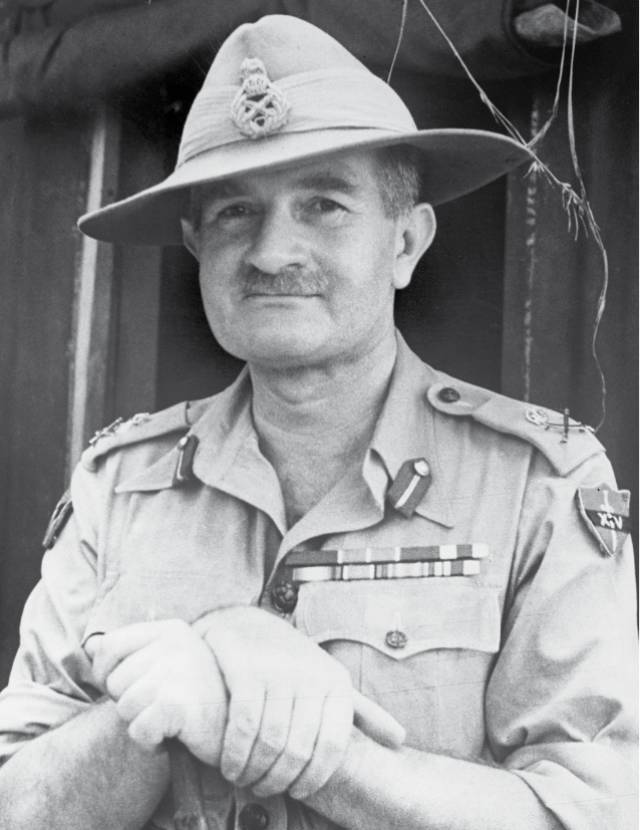 Field Marshall Viscount Slim was referred to by Admiral of the Fleet Earl Mountbatten, who was Supreme Allied Commander of Southeast Asia, as "the finest general World War II produced". After the war he was head of the Imperial General Staff, Britain's top military post, from 1948 to 1952, and was governor general of Australia from 1952 to 1960. This article is reprinted from a 1945 issue of Phoenix. the South East Asia Command magazine.

The General stood on an ammunition box. Facing him in a green amphitheatre of the low hills that ring Palel Plain, sat or squatted the British officers and sergeants of the 11th East African Division. They were then new to the Burma Front and were moving into the line the next day. The General removed his battered slouch hat, which the Gurkhas wear and which has become the headgear of the 14th Army. "Take a good look at my mug," he advised. "Not that I consider it to be an oil painting. But I am the Army Commander and you had better be able to recognize me - if only to say "Look out, the old b . . . . is coming round".

Lieutenant-General Sir William Slim, KCB, CB, DSO, MC ("Bill") is 53, burly, grey and going a bit bald. His mug is large and weatherbeaten, with a broad nose, jutting jaw, and twinkling hazel eyes. He looks like a well-to-do West Country farmer, and could be one. For he has energy and patience and, above all, the man has common sense. However, so far Slim has not farmed. He started life as a junior clerk, once he was a school teacher, and then he became the foreman of... Read more 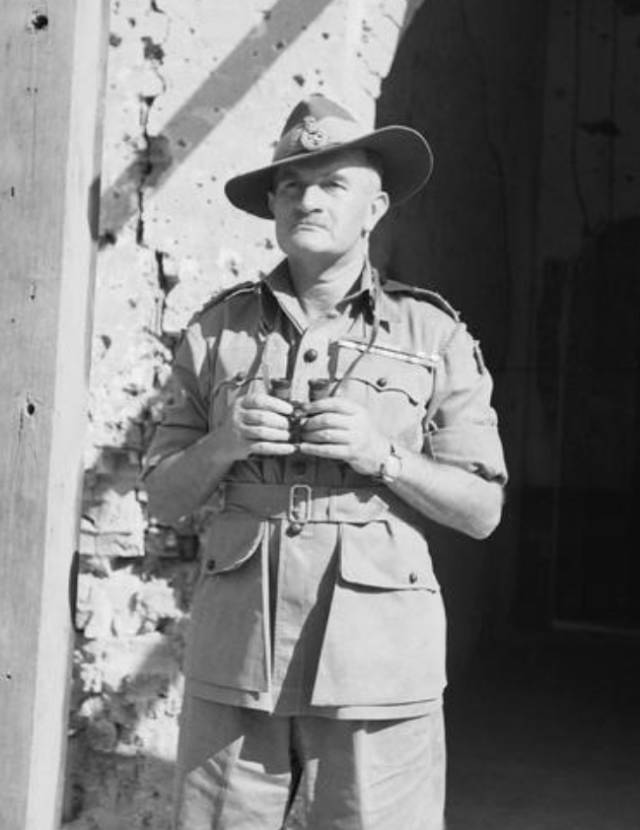 "My object in this Press conference is to try to put before the Press of the world that every effort has been and is continuing to be put into the South East Asia campaign; that the Burma battle front is a single unified front: that my plans are made in close consultation with my deputy, General Joseph Stilwell, and we carry them out with a common end in view.

Please therefore look upon Burma as one big Allied effort, British, American and Chinese, with the help of the Dutch and the other nations that are with us. It is going extraordinarily well as an Allied effort. We do not want a lot of limelight, in fact we do not want any, but I go round and talk to the men in the Command and what worries them is that their wives, their mothers, their daughters their sweethearts and their sisters don't seem to know that the war they are fighting is important and worthwhile, which it most assuredly is.

The South East Asia Command is a long way off: it is apt to be overshadowed in Europe by the climax of the war against Germany and in the Pacific by the advances of Admiral Nimitz and General MacArthur. Therefore a major effort by Allied forces, doing their duty in inhospitable places, has been somewhat crowded out and the forces have not received their proportion of credit. My purpose this afternoon is to put their achievements before you. 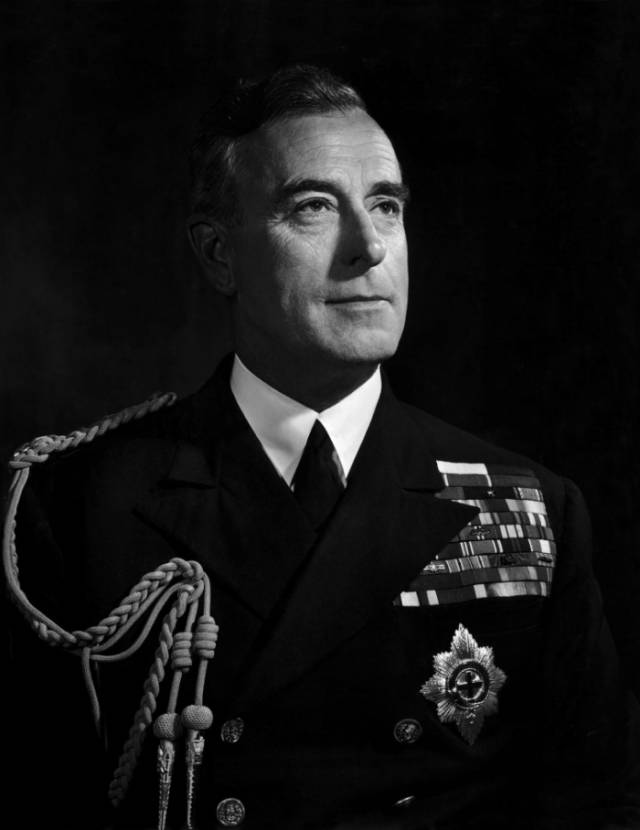 The Burma Campaign Memorial Library is held at SOAS (the School of Oriental and African Studies). The library is a comprehensive collection of writings about the war in Burma between 1942 and 1945.

The collection was compiled by volunteers from the Burma Campaign Fellowship group over a four year period (1995-1999). It initially consisted of private donations and bequests from veterans and other individuals; books drawn from the library collection of SOAS and books purchased with the aid of a grant from GB Sasakawa Foundation. This initial collection was complemented by a significant addition of Japanese language titles relating to the campaign donated by the All Burma Veterans Association of Japan in 2001. The collection is constantly growing as existing rare books are acquired and new works on the conflict published.

A descriptive catalogue of the material available can be found here.

Items from the Burma Campaign Memorial Library collection can be consulted in the Special Collections Reading Room, SOAS Library.

Further information on the library can be viewed here.

Front line and Fortitude, Memoirs of a Wasbie with the ‘Forgotten Army’ by EJ Lockhart-Mure Astonishingly, there is very little information about the work of the Wasbies and no full-length book has been written which gives an account of their exploits – until now.

For the first time in book form Front Line and Fortitude provides a personal record of these brave women and their magnificent contribution to the war effort. The book is based on and expanded from Maria Pilbrow's original diary, and her niece, Elizabeth Lockhart-Mure discovered her diary after Maria's death, and told this extraordinary story.