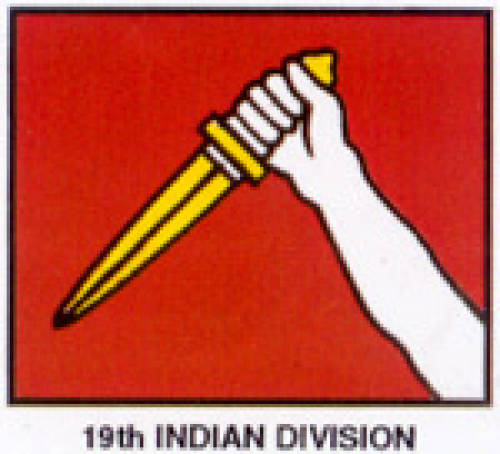 The Badge of this unit was a yellow dagger held in a clenched hand on a red background.  This Formation served with the ""Fourteenth Army"" in Burma & was in the thick of the fighting that led to the Liberation of Burma.

It was the 19th Division that after fierce fighting that established the Irrawaddy Bridgehead at Kyaukmyaung which enabled them to drive through & capture Mandalay, where they raised the Union Jack over Fort Dufferin on March 20th 1945.

They were commanded by

The Divs Tell Their Own Story

Taken from the Part II of the SEAC Souvenir Newspaper

After one of the longest periods of training that any formation has been given in this war, the 19th Indian Division—now famous as the Dagger Division—had its baptism of fire in the advance across the Chind­win in November, 1944. Within seven weeks the Division had marched 400 miles and fought 18 battles, against elements of three different Japanese divisions.

While one Brigade Group, on pack basis, forced back Jap rearguards through some of the most difficult hills and jungles in the world, the rest of the Division moved further North by a rough mountain road hewn by the Japs through these mountains.

The enemy was surprised and given no time to concentrate or put any serious demolition scheme into execution. Only air supply and the marching fitness of the troops made possible the speed and the success of the operations: and, before Dec­ember, 19 Div poured into the North Burma Plain and joined hands with 36 -Div, which had come down the Railway Corridor from the North. The Japs had thus been driven out of Northern Burma.

Now 19 Div moved clown the Rai1way Corridor and the North Burma Plain, and by Christmas had driven back Jap rearguards and captured the Kawlin-Wuntho air­fields. These were soon repaired enough to land light aircraft for eva­cuating casualties and then large transport aircraft carrying ammuni­tion and supplies.

Jap resistance steadily increased. Individually, the enemy fought in his positions to the end, and retired only when, at times, his Higher Command ordered a rearward move. At Leiktu, Kin-U, and Sadwingyi, particularly, hard actions were fought until, with 2 Div, we drove the Japs out of Shwebo and mauled the retreating enemy.

At the same time, the Division had established itself into two areas on the East bank of the Irrawaddy  — Thabeikkyin in the North, and Kyaukmyaung in the South. opposite Shwebu.

The drive from the Chindwin to the Irrawaddy had been hard and far. Considerable casualties had been inflicted on the enemy; the Divi­sion’s own were not heavy, and the morale of the Daggers was high as they faced the task of forcing ano­ther crossing of the broad river Irrawaddy.

Preparations proceeded secretly and methodically, and Jap attempts to operate West of the river were liquidated in some brisk fighting. Meanwhile, bold patrolling across the Irrawaddy bemused the Jap and made him dissipate his forces along the considerable stretch involved.

On 14 Jan, at night, the crossing was made, and the build-up followed nightly and rapidly in spite of all Japanese efforts to throw our troops back over the river. Infantry, gun­ners, sappers, and HQs—all were involved and the fierce fighting for the Bridgeheads was on.

Gradually the Daggers extended their hold. Important heights were seized and all the while the Japs reacted violently and concentrated against the Division the heaviest con­centration of Jap artillery yet pro­duced in Burma.

Fanatical attacks were thrown back—at times they charged scream­ing; at others, they attempted to get in after crawling silently to hand grenade range and then charging re­gardless of losses.

After one charge 69 Jap corpses were picked up in front of one of our localities.  Grenades, bayonets, kuk­ries and even stones were freely used, but our men hung on to their hard-won ground with a dogged determination that was magnificent. The RAF gave unstinted and deci­sive support, and, in due course, the Divisional Commander considered our lodgement firm and started to cross the hulk of the Division over, including tanks, which now joined the Division for the first time, ready for the advance on Mandalay. The Bridgehead fighting cost the Japa­nese 1,000 dead.

For our break-out from the Bridge­head, it had to be enlarged to gain more room for manoeuvre. A lake and waterlogged ground limited the exits for tanks to two narrow necks of dry going, both defended by the Japs.

A series of hammer blows, with tank support, secured the vital ob­jectives. The Bridgehead was extended along the river to Singu and deep into the plain to the East.

The Engineers, the Administrative Services and the Staff were working at full pressure getting everything over the Irrawaddy ready for the break-out and the advance on Mandalay.

By a series of thrusts in different directions, Japs were again bemused and showed every sign of nervousness and their commander finally cast the die and lost,. He chose to hold on to the baking arid slopes of the Gawuntaung ridge and kept the bulk of his troops there in the East, covering the main road to Mandalay.

One of our brigades. with the minimum of guns and a few light tanks, fought him back grimly there in extreme heat, often very - short of water.  But the decisive blow was not meant for the East side. The point of the Dagger, with ful1 weight of guns and tanks behind it, struck in the West down a little used track hugging the Irrawaddy.

Village after village was captured or by-passed. Before the dazed Japs knew what had hit them the great Pinle-in hill-feature was passed.  Chaungmagyi Chaung   crossed at an unguarded bullock-cart ford, and our leading brigade was fighting in the streets of Madaya, having forestalled the Jap main body.

Bewildered bands of enemy were directed by their commanders to re­form in places which, unknown to them. were already in our hands. Confusion reigned in their ranks and we took due toil of them.

Meanwhile, our Mobile Force, named Stiletto, (Tanks. Infantry and Guns) was working its way rapidly southwards along the East bank of the Irrawaddy by tracks the Jap had never dreamed would be used.

And so at dawn on 8 March 45, the leading British troops entered the Northern corner of Mandalay. Down the two approaches from the North 19 Div was in full cry and by the afternoon had joined Stiletto, now fighting hard.

The famous Mandalay Hill, pagoda-covered and revered by all Buddhists was now unfortunately brought into the fight. At first, it was hoped that the Japs would not continue to fight from it. However, they did, and eventually we opened fire on it. Only after much hard fighting did we capture it.

The seizure of the summit was achieved by a brilliantly executed night move which got round the flank; a precipitous climb in the dark and a dashing assault in the grey dawn which routed the Japs on the summit.  The key to Mandalay was ours.

During the next few days, in stub­born fighting we worked down the remainder of the hill, clearing Japs from concrete cellars and pagodas and the enemy was finally ejected.

Below the bill lay Fort Dufferin — with old fashioned 25ft high walls, very thick, and a 75ft moat. A gal­lant probing attack and stout patrol­ling showed the Jap was determined to hold on and had ample MGs covering the approaches.

Aircraft and every modern weapon were brought to bear to reduce Fort Dufferin. The stratagems of the Middle Ages were revived; an under­ground water channel was discovered through which men could pass with difficulty.

Simultaneously in the city, bitter house-to-house fighting  enabled us eventually to cast a net right round the Fort while we had another, wider cast, some miles further South. The Japs decided to evacuate, and began dribbling out in small parties by night.

Some escaped and some were in­tercepted and killed by our men who captured many guns. On 10 March 45, two men, bearing a Union Jack and a white flag were seen in the Fort. They were Anglo-Burman refugee prisoners. The Japs had fled and the whole of Mandalay and its Fort were once more in the hands of the British.

Meanwhile, even before Madaya, one, brigade has moved East­ward, leaving its MT behind and taking mountain guns. Moving very fast, much by night and travelling far to the south-east by, smugglers’ paths and jungle hill tracks it sud­denly appeared in Maymyo. former­ly HQ of Jap 15 Army, completely surprising the Japs who fled. We caught most of their MT and inflicted many casualties in a model night ambush.

The 19th Indian Division had come far and fast. Heat and dust had been extremely trying and the fighting had been severe.  As is the case in such hard fighting, our casualties had not been light. But sheer guts and determination had carried the men through, and their morale was terrific.

Infantry, gunners, sappers, tanks, and the other Services had all played their part. Worcesters. Welch. Royal Berkshires, Rajputana Rifles. Fron­tier Force Regiment, Baluchis, 15 Punjab Regt. Gurkhas, the Assam Regiment, RA and Indian Artillery. Madras and Bombay Sappers. Tanks of the 150 RAC (Y and L) and Indian Light Cavalry. RIASC. Medical. EME and all Services and the Staff had given of their best and were justly proud of their successes. After Mandalay there was no rest for them, and having liquidated Japs left North of the Myitnge River they moved South, joining 4 Corps for the Rangoon operations.

While the Armoured Brigade, with 5 and 17 Divisions swept on in the van, 19 Div ferried and footslogged hard, catching up during the pauses, and liquidating en route many Japs overrun by the leading troops. Some of it proved stiff fighting.

And further North, 19 Div troops were pushing on towards Kalaw, in determined fighting in some of the thickest jungle in Burma.  They drove back the Japanese 15 Div and other troops trying to hold on near Toungoo to allow their main bodies to escape.