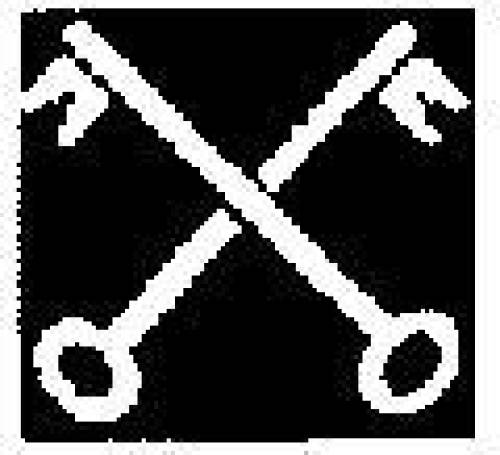 The Badge of this unit was two white keys crossed on a black square background.  It was chosen by the then General Officer Commanding Maj Gen Henry Charles Lloyd MC (later General Sir henry Charles Lloyd KGB DSO MC). When Maj Gen Lloyd commanded the 1st Guards Brigade, the Brigade insignia was a single key. On promotion to command the 2nd Infantry Division in 1939, he added a second key. The Badge was a conincidental choice for in earlier days in the History of British Arms it was the practice in time of need for two armies to be raised, one in the north of England by the Archbishop of York and one in the south of England by the Archbishop of Canterbury. The armies carried on their shield and banners, the crossed keys of  St Peter, taken from the arms of the Archbishop of York.

This was a pre-war regular Division, and as such was part of the 1939 BEF forces serving in France and Belgium, until it's withdrawal at Dunkirk in May1940.

The Division left England for India in 1942.  After nearly two years training in India, it was hurriedly moved to Dimapur on the borders of India and Burma in March 1944.

It was subsequently one of only two British divisions that fought in Burma, taking part in many battles that eventually drove the Japanese from Burma.

The Division returned to India in June 1945 and was moved to Malaya at the end of the year.

One brigade (the 5th) formed part of the Commonwealth Occupation Forces in Japan.

The Division consisted of: